Home Insights Innovation The wave of disruption spares no one, it’s time to get your... 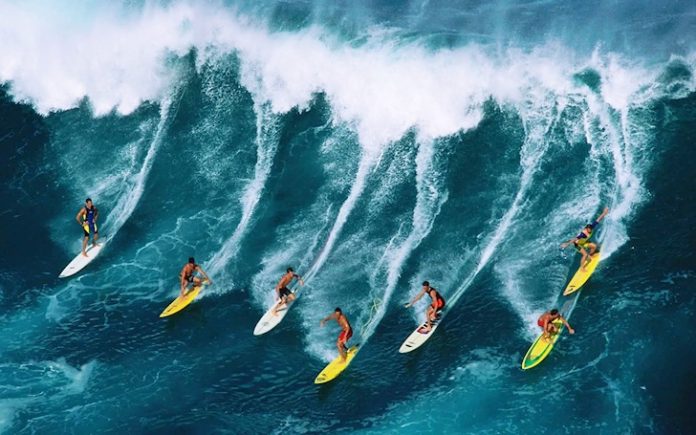 Digital disruption is the top trending topic in business today. Chief information officers (CIOs) thrust into the limelight as they oversee technology in their organisations, understand that they have to move with the times or be left behind.

At the ConnectGov summit in Bhutan, CIOs and senior executives spoke about the steps they are taking to manage digital disruption.

“In healthcare, the disruption is happening on multiple fronts”, said Dr Chong Yoke Sin, chief executive of IHIS. She was one of 140 CIOs and senior executives from the public and private sector who attended the two-day summit in Bhutan last month.

The patients are now calling the shots because technology among other things, allows them to find out more about their medical conditions, provide data on their recovery and monitor their daily progress.

“The model of care has changed. The patient plays a more important role, he can now call the shots,” she said.

As an example, she cites tele-diagnosis where a software system can tell patients about their condition and the drugs they are taking.

“The system can tell you for example that your glucose level is too high, that you are taking too much blood thinning drugs and that you need to change the dosage.

Over at the Vanderbilt University in Tennessee, United States, she said doctors and scientists are using 3D printing to build new kidneys for transplants.

Meanwhile, the financial industry is also feeling the heat from non-banks like Chinese e-commerce giant Alibaba and social network Tencent.

Mr Michael Leung, CIO and chief operating officer of Citic Bank International said these companies have set up their own payment channels outside of the banking system.
“Few people are walking in to the bank branches. Smartphones is the major disruption, they have replaced the bank branch with phone banking,” he said.

The hotel industry is also being disrupted. It used to be that holiday makers search the Internet for the best deals on hotels and flights. However, peer reviews on social media have replaced good deals as customers look to other customers to provide them with the information on how good hotels are.

“Today with social media, people go to travel sites like Trip Advisor to find out what other holidaymakers have discovered about the hotels and the places they want to visit. Their decisions are based on what the experiences of other people,” said Mr Ng Tiong Gee, senior vice-president for technology, Resorts World Sentosa (RWS).

People are looking for memorable experiences, and so RWS is managing this disruption by working towards personalising the visits and experiences of each of the 30,000 people who visit the theme park each day.

“Mass personalization is transforming our entire business. This is what we’re going through.
Technology lets us to do mass personalisation, allows us to find out customer preferences like what do they do and where they go during their visit to Resorts World. We give customers what they want and like, not by pushing them special offers through e-mails.”
The digital disruption is also felt in governments. Mr Andres Kutt of the Estonian Information System Authority said that as a small country of 1.3 million people it has to use technology as a modernizing strategy.

“We used technology to keep complexity and costs in check so that we are less wasteful. For example, we’ve a ‘once only policy’ where citizens have to present their personal data once to the government. After that they don’t have to give their details again in any government dealings,” he said.

Mr Randeep Sudan, World Bank advisor for digital strategy and government analytics, remarked that countries which present “government as a platform” is making a good move because this strategy simplifies complexity and allows people faster access to technology.
“Governments are capturing data as they have control of public sector transactions and the economy. Data is very powerful because it is the currency of economic development today.”
It behooves governments then to ensure that the data is securely stored, he added.
The next step for governments would be to use artificial intelligence to provide improved level of citizen services, said Mr Sudan.

In Singapore, the government is not under pressure to transform because there is “no government Uber” taking away its job, said Ms Jacqueline Poh, managing director of Infocomm Development Authority, a public sector agency which promotes technology and its use as well as act as a telco regulator.

Said Ms Poh: “The job for government is to look within ourselves, to provide what makes the most sense for our citizens.”

However, like all other industries, change is the only constant for the government. To keep up with the industry developments, the IDA will split into two organisations called the Infocomm Media Development Authority (IMDA) and GovTech, both of which will come into being from Oct 1 2016. IMDA will oversee the technology industry including telcos while also acting as the telco regulator.

GovTech, possibly the first of its kind in the world, will oversee technology development in government. Ms Poh will lead GovTech.

“Governments have a great deal to do with innovation and disruption. While no one is going to go for a different government because it is a more digital government, it doesn’t mean we should rest on our laurels.”

In the last five years, IDA has been big on innovation. One particular innovating programme is Accreditation@IDA which accredit products from small Singapore companies especially start-ups.

Said Ms Poh: “We believe that small companies need work, with that comes discernment because customers tell you what’s wrong and right. They can then improve their products. As accredited companies, public sector agencies can buy from them and government can be used as a reference customer.

“Thirteen accredited companies are in this greenlane process. Any government agency looking for solutions provided by these companies must buy from them. If they don’t, they will be queried and audited. A total of  $32 million business have been created for these small companies.”

Over in Catalonia, a region in Spain, the local government also insists that technology must be usable and beneficial and not implemented because it is the latest craze.

Mr Jodi Escale, CIO of the Catalonian government, highlighted that the challenge for the public sector is not technology.

“It’s about information. Government needs information and economic resources to transform itself. Our question is to ask why we’re using technology?”

Technology, he said has improved the efficiency of the Catalonia government by ensuring that schools and public buildings including hospitals are connected. Sourcing for technology has also been streamlined 20 vendors to a handful today.

“Now we want to use Catalonia as a living lab especially in areas like mobility and Internet of Things.”

With digital disruption, people are concerned about various issues such as privacy and online rules of engagement among businesses.

Estonia’s Mr Kutts said the greatest role for government in digital disruption is governance.
Government has to draw up the framework so that everyone knows how to interact with each other. For example, a data privacy framework is needed so that citizens are aware of who has the right to see their personal details.

Governance is also needed in e-health which is used by governments to ensure that its medical and healthcare services reach all its citizens.

Dr Chong’s advice for governments setting up e-health services: “Set up the governance model. For example, if you need to digitalise your records like x-rays, you can choose to build your own or buy a system. When you buy, many of the protocols are built in and your medical service may not understand them. If you build, you’ve to include the knowledge of your doctors into the system and doctors are always too busy to do this. So for quick set-up, buy the systems but it means you’ve to draw up a framework where everyone understands how the system works and how it will benefit you.”

AI & ML : Peeling the Layers and Going Under the Hood

Building the right culture for the App Age

Innovate and Transform your Business