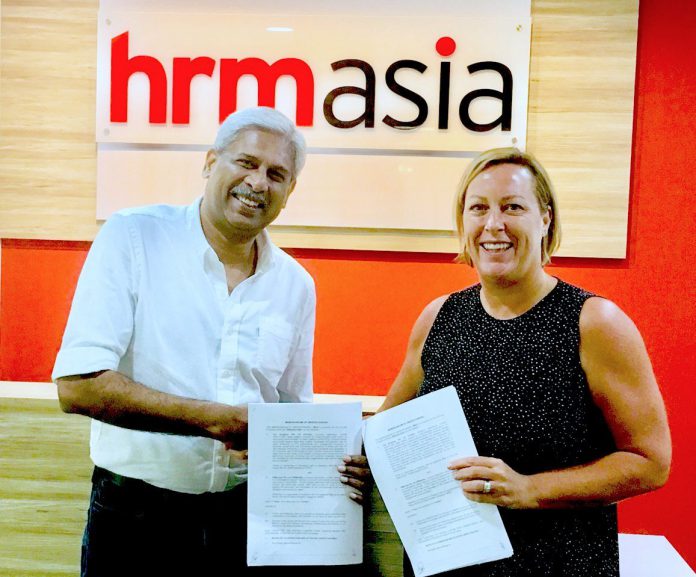 This article was published in HRM ASIA,
FEBRUARY 28ND 2019.

The CIO Academy’s Ramakrishna (right) and Joanna Bush, of HRM Asia, have signed a memorandum of understanding for a continuing partnership

The Singapore-based CIO Academy Asia will play a lead role across several conference streams of HR Festival Asia, taking place on May 8 and 9 this year.

Organiser HRM Asia announced the unique partnership this morning, noting that it will highlight the growing importance of the relationship between HR leaders and their counterparts in charge of enterprise-level technology.

CIO Academy will host a number of breakout sessions during HR Festival Asia, pairing selected Chief HR Officers and Chief Information Officers for intensive workshops on a range of topics.

These include detailed briefings on artificial intelligence and robotic process automation, collaboration between the HR and IT teams, and strategies for harnessing data most effectively.

“The effective convergence between HR and IT will launch organisations into the digital future – HR Festival Asia is the only conference in Asia-Pacific working to build that vital C-Suite relationship.

Ramakrishna (pictured, left), CEO of CIO Academy Asia, said his team was excited to partner with HRM Asia for the ongoing project.

“The digital revolution has completely transformed the future workforce,” he said. “HR practitioners and IT leaders need to work together and rethink the way their organisations should leverage technology to recruit and retain talent.”

Original article can be found here.

Salute to women in the tech sector

Call for data protection rules to apply to public sector