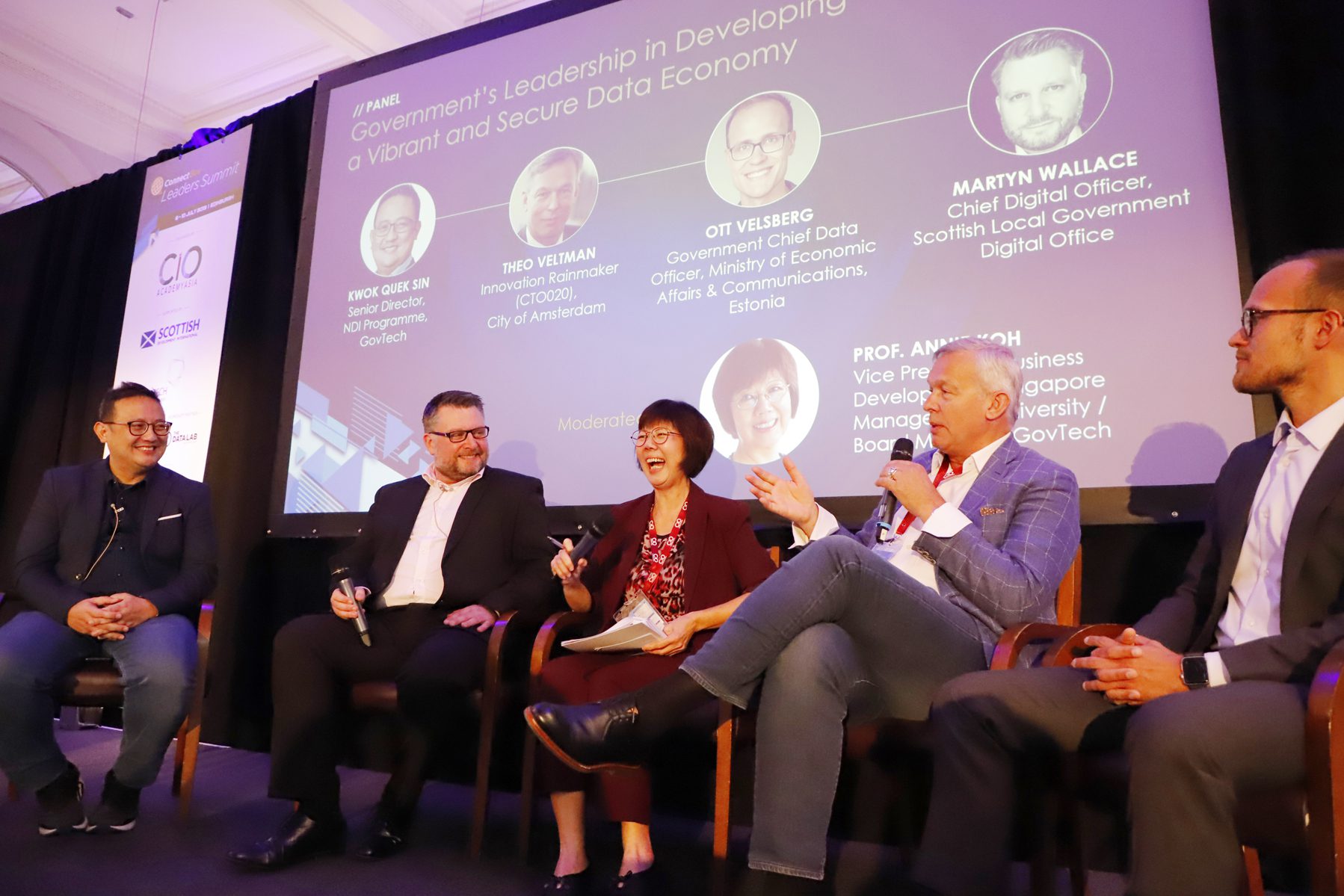 Kwok Quek Sin from Govtech Singapore who oversees Singapore’s National Digital Identity Programme provided an overview of the thinking and structures underpinning the initiative. While governments’ role as a regulator, service provider and economic enabler remain the same in a data economy, new implications and questions arise where they intersect with data dimensions. In delivering government services, key concerns were around the best use of data to deliver effective and even anticipatory services with zero friction, calling for a whole-of-government perspective along with a service-driven mentality.

Taking a Whole of Government Approach

The WoG initiatives enjoy strong leadership support from across almost 100 different ministries that enabled a strong tripartite relationship between Policy led by the Smart Nation Digital Government Office, Technology led by Govtech, and Operations under the purview of ministries. Underlying these are 2 principles, namely Digital to the Core where all government digital services must be digital or have a digital option, and Serving with Heart where the focus is on real outcomes rather than technological excellence.

The changes also called for a shift from an object management to a product management mindset that required ongoing attention to outcomes, along with a new emphasis on building engineering capabilities and a move towards platformisation to enable reusable components.

Martyn Wallace, Chief Digital Officer for Scottish Local Government Digital Office shared insights on the Scottish Government’s journey of digitalisation myriad local government agencies along with private sector partners. Focusing on the customer as a starting point, a government Commission report recommended 6 principles around which data-driven initiatives could develop – namely People in Communities, Prioritizing Invention, Reducing Inequality, Working Together, Improving Performance, and Cost Reduction. These have resulted in significant cost reductions even as customer-focused services are rolled out based on a spirit of service innovation.

Fundamental is the focus on outcomes even as initial developments raised questions as to whether efforts were merely tinkering or leading to real transformation; there were also concerns around the balancing of new technological possibilities against public sector reform. Using a schema involving 3 kinds of data (Past, Real-time and Predictive), they were able to frame their development of digital services for families, smart city services, local councils, tele-healthcare, fall detection for the elderly and infirm, community budgeting and other public services designed around user journeys.

Of the People, Process and technology dimensions at work, he remarked that a focus on breaking down silos, identifying common challenges, addressing culture and innovation were key. The common basis for shared services across councils also helped lower the total cost of ownership and speed adoption.

Shaping the Future of Data

Taking discussions to a further level, Prof. Annie Koh, Vice President, Business Development, Singapore Management University, led her panel of speakers through an inquisition into the Purpose, Pervasiveness and Partnership dimensions of data. On their experiences in the development and delivery of key public services, panellists drew on their own backgrounds, perceptions and experiences to highlighted the contrasts in organisational and institutional culture, expectations of how things are done, differential focus on dimensions of initiatives, and challenges of communicating benefits to citizens and end-users.

Ott Velsberg, Government Chief Data Officer, Ministry of Economic Affairs and Communications, Estonia, shared insights on Estonia’s new Authorization Service that governs data sharing and permission protocols that determines how healthcare, genomic and financial data can be shared. Only 10% of citizens has sign-up to date which spoke to reservations over security and privacy.

Kwok Quek Sin shared that the main challenge was communicating what citizens will get out of participation rather than concerns over how their data is used.

The ethics of data was a greater concern for Theo Veltman, Innovation Rainmaker (CTO020), City of Amsterdam, in the context of Amsterdam and data initiatives elsewhere in Europe. He shared that the issue of digital rights for individuals and cities is a dimension of the treaty of human rights where individuals have the right to opt out or be forgotten, and the right to use public and private digital services without giving out personal data.

For Scotland, the greatest challenge from Martyn Wallace’s perspective was the issue of GDPR, the interpretation of rules and exceptions such as allowing the right to be forgotten.

On Open APIs and Government-Industry Partnerships

Martyn shared that in Scotland contracts for new initiatives collaborating with the private sector are already in the works based on open APIs. Quek Sin commented that the openness of open APIs are a continuum but through the government’s platform, startups could now drastically reduce their customer acquisition costs. In contrast, Estonia’s Open API does not attract as much interest from small companies. Instead, individual companies on a case-by-case basis can have access to non-personalised open data for development of services.

On Drivers of Success

Martyn also spoke to the Smart Small and Break Things Fast agile approach which allowed quicker testing of systems efficiency and outcomes to ensure broader success. On Singapore’s experience, Quek Sin noted that money and mandates were useful incentives and drivers of success but proving value to both internal and external customers is increasingly important.

Cyber Security and Data Analytics are Changing the Game